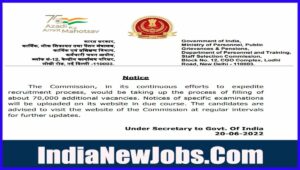 SSC 73333 Vacancies Recruitment 2022-23 Notification: The staff Selection Commission (SSC) is soon going to release the latest notification for the recruitment of 73333 posts in the various departments of the Govt. of India. Recently Prime Minister Narendra Modi declared to give 10 lakh government jobs in the next 1.5 years. In the response to the Government’s mission of Govt Jobs, the departments are getting into action by declaring their vacant posts.

On June 20, 2022, the Staff Selection Commission released the notification for the candidates stating that “The Commission in its continuous expedite recruitment process, would be taking up the process of filling of about 70,000 additional vacancies. Notices of specific examinations will be uploaded on its website in due course. The candidates are advised to visit the website of the commission at regular intervals for further updates”

So, now the govt job aspirants are eagerly waiting to see which posts would be advertised by the Staff Selection Commission (SSC), and what would be the qualification for the newly created vacancies. However, the SSC has not declared the number of department-wise posts on its short notice, still, the candidates can get the idea that a good number of vacancies are coming, which is a bonus for most of the aspirants.

So, let’s hope that the Staff Selection Commission (SSC) will soon release the notification for the 70000 new vacancies as dictated in its short notice released on June 20, 2022.

As on September 5, 2022, SSC has received the acquisition for 73333 vacancies in the various departments. The department-wise vacancies and SSC Exam Wise details are given below in the PDF.