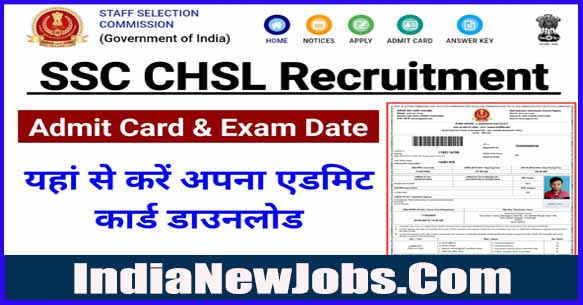 SSC CHSL Admit Card 2022: The Staff Selection Commission (SSC) is going to conduct the Combined Higher Secondary Examination (CHSL) Tier-2 Examination on September 18, 2022. The candidates who qualified in the SSC CHSL Tier-1 exam can appear for the Tier-2 Descriptive Examination. The region-wise application status and admit card for the SSC CHSL exam can be downloaded from the direct link given here. The SSC CHSL admit card is released four days before the exam date.

The Selection Process for SSC CHSL 2022 includes the following Stages:

The SSC CHSL Tier-1 Exam is conducted in the Computer Based Test (CBT) mode. The CBT exam includes a total of 100 questions with 200 marks. Two marks are awarded for each correct answer and half a mark (0.5) is deducted for each wrong answer. The time duration of the exam is One Hour.

This is a descriptive exam that is designed to test the written skills of the candidates in English/ Hindi. The Paper would comprise writing of an Essay of 200-250 words and Letter/ Application writing of approximately 150-200 words. The minimum qualifying marks in Tier II would be 33 percent. The performance in Tier-II would be included in preparing merit. The best way to prepare for the same is to read lots of articles from various newspapers. Apart from this, you need to be well aware of the pattern of Letters and Applications.

SSC CHSL Region Wise Application Status, Admit Card and Official Website Links are given below for the convenience of the candidates